Have been gorging myself on Shadow Show, the now sadly posthumous tribute to Ray Bradbury.  Featuring some absolutely lovely stories from some of the heaviest of heavy-weights.  Here’s a pretty astute blog review that Mort Castle forwarded along.  More articulate than I — I posted my first Amazon review and just simply gushed.

I won’t take issue with Jef with one F’s statement that Joe Hill is becoming one of our most important writers ever.  A little hyperbolic, but then again, I could easily TALK OR WRITE IN ALL CAPS when enthusing about his comic series “Locke and Key“.

And however much his own man he becomes, one will never forget that Joe Hill has a award-laden father named Stephen King.  Here are a couple of (again, more articulate than I) competing posts showing how polarizing the fellow still is.  Me, I’m trying to overcome my ambivalence — Mrs. Morlock and I are currently reading “IT” to the little one (I know, questionable parenting).  His shit is soooo long and meandering, his voice isn’t at all splashy or clever, but why the hell does it stick in my head so?

And speaking of writers:  just received word that the submission window for DEATHSCRIBE 2012 has officially been extended to August 15th.  So breathe a sigh of relief, y’all.  You have time for an extra summer shandy.  But get to work!  Those ten-minute terrors won’t write themselves.

And I should say, yours truly is on the first-round read-thru team this year and I’m already extremely jazzed by a couple of the submissions.  Last year’s Alabama Mermaid will be a tough act to follow, but I guarantee this year’s show will be amazing. 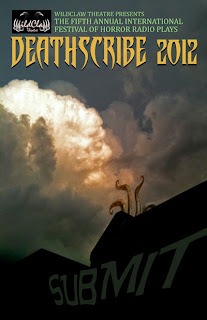