Continuing my quest to learn more about the horror genre of film, Scotty B and I took in a small, family film called Poltergeist. Released in 1982, Tobe Hooper’s horror classic tells the story of a terrorized family dealing with an unknown evil presence in their home, one that has seemingly abducted their youngest child. But the child hasn’t gone far – she’s somewhere in the home.

SPOILER ALERT! This conversation divulges in detail many of the scary twists and turns of the film. If you haven’t seen Poltergeist, you probably won’t want to read this!

Scott: Poltergeist is one of my favorite horror movies ever. I have my reasons (some of which you might be able to guess). But where does it stand for you?

Casey: It’s one of the few horror movies I’ve seen that I’ve both been scared by and, for the most part, have been able to keep my eyes open throughout. That ranks pretty high in my book! There is such a focus on performances, it’s really a great movie for actors to watch.

S: Who in particular?

C: Particularly JoBeth Williams and Craig T. Nelson as the parents, and Beatrice Straight as Dr. Lesh. All three face such a frightening reality but they hold onto each other and treat one another with compassion. At the heart of the story is a family who love one another facing extraordinary circumstances.

S: Yeah, I love how intimate the movie feels, especially that scene with Dr. Lesh and Diane, the one at night when they’re whispering about the light. There’s something so sweet and yet reassuring and yet deeply frightening about that scene. 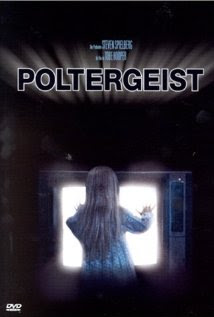 intimate despite the big ass monsters throughout.

S: As you might imagine, horror fans love Zelda Rubinstein (“Tangina”) in that movie.

S: I think Oliver Robins, who plays Robbie, is excellent too, especially that moment when he discovers Carol Anne’s “location” and is too scared to yell. How long it takes him to yell “Mommy!” is so true to life, like trying to wake up from a nightmare.

C: Agreed. That little dude didn’t have an easy job. He’s got an inordinate amount of scared faces in his bag of tricks, and there are so many close ups of him in despair. I appreciate that you see the story, at some points, through his eyes. As a child afraid of storms and weird trees, missing his sister, loving his parents. It feels very real.

S: Yes, the story’s point of view changes throughout, which I really like. I also like that it’s a movie that makes me genuinely sad at times. Watching their reactions. That it’s so reactive makes it a quintessential horror film.

C: You’re right, there is such a deep sense of sadness. You’re watching a family deal with the loss of a child. It’s heartbreaking.

S: Yeah, they really might not get her back. You had mentioned that you found it sad that Nelson’s character promised that he’d “Never” let go of the rope during the retrieval of Carol Anne.

C: Totally. Immediately I felt like it was a promise he couldn’t keep and when he didn’t, it would haunt him to feel responsible for the loss of both his daughter and wife. Oy. Big stuff.

S: Yeah. That’s a really sad idea to me. When faced with the unknown, you can’t make any promises.

C: As an audience, we’re duped into thinking “this house is clean” but the keen observer can probably guess we’re in for a lot more. Did you see that coming the first time you saw it?

S: Nope. They up the ante from paranormalist to medium. That giant skull comes flying out of the closet. The parents are heroes. It definitely seemed over to me.

C: It’s not one of those situations where you’re thinking, “That was too easy.” They go through hell.

S: Exactly, they even get slimed.

C: Haha, yeah. I did have a sick feeling in my stomach when Diane (the mother) leaves the kids to g

o color her hair later in the film. I knew that wasn’t going to end well.

S: Well, when the resolution starts to wear on and they don’t just wrap it up, you know the other shoe’s gotta drop. You just have no idea what that shoe is. What’d you think of the big climactic showdown?

C: It was awesome! You get a fierce mama running around in her underwear, climbing the walls, which is an evil we haven’t seen yet. That damn clown comes back. It seems, though, that while there is for sure an evil presence in the house, it doesn’t want to kill them.

S: One of my favorite elements of that climax is that the dead aren’t animate, that the bodies and caskets resurface but they aren’t like, grabbing at them or shuffling after them like zombies. There was probably a temptation to do that which I for one am glad they resisted.

S: Yeah, it’s ambiguous whether it wants to kill the family, though it DOES seem to want the kids. For their innocence? Their life force? Who knows?

C: It’s like a big game. Mama falls in the slime-bucket pool, and I thought the skeletons would drown and kill her, but they just sort of bobbed up and down with her. It’s as if the evil picks and chooses when to really show its hand. What was your take on some of the creepy things that happened – like the face melting scene in the bathroom and the tree swallowing Robbie? Is the poltergeist making them hallucinate? The tree thing is what I can’t get over…

S: The face peeling is a hallucination, or maybe just a morbid waking dream. The tree swallowing Robbie is a weird one. What happens if he gets swallowed? It’s weird to me because it’s outside the house, though, I guess still on the defiled land.

C: Yeah, but I think after my favorite old oak tree tried to eat my son, I might not sleep there another night.

S: I think they’re gratuitous in a storytelling sense (they could’ve found a less silly way to distract the parents so Carol Anne could be taken), but they definitely up the creep factor with that stuff.

C: True, that’s when she gets all swirled into the closet, huh? That part of the film is very sensational.

S: I suppose the pool is outside the house too. I agree though, the tree is a little over-the-top.

C: I’m really glad I saw it, it’s clear why it’s such a powerful, lasting force in the genre. Have you seen the sequels?

S: I have a vague recollection of seeing the second one, but that was a long time ago. The first one is the only one I’ve given repeat viewings. Though they do make it clear that poltergeists are different from hauntings, as poltergeists focus upon people not places. Perfect setup for sequels. Or perhaps a series on the CW. Sarah Michelle Gellar is back on TV, after all.