Scooty B and I took in 2006’s Pan’s Labyrinth, written and directed by Guillermo del Toro, a little while back. As usual, Scott had already seen it and I was a viewing virgin. I remember seeing the previews for Pan’s thinking, “Wow, that looks magical/whoa, that looks insane!” Twas both…

SPOILER ALERT! This conversation divulges in detail many of the scary twists and turns of the film. If you haven’t seen Pan’s Labyrinth, you probably won’t want to read this!

Scott: When Pan’s Labyrinth first came around it was billed as a horror fantasy. Two hard genres to pull off well, and it seeks to do both. Does it live up to that?

Casey: There are certainly elements of both genres, for sure. The most horrific parts of the film, to me, were the occurrences of violence against humans by humans, of which there were MANY. Really, there was so much graphic military violence and torture, I was sick. I think the suspension of disbelief by a character in a completely surreal situation defines fantasy for me, and there’s plenty of that, too. When you saw the film for the first time, what was your impression?

S: I thought it used fa 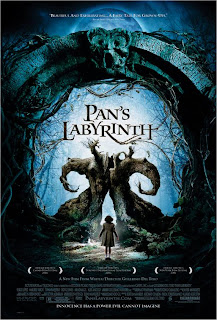 ntasy and horror as mirrors for each other. Humans all have both hopeful and dark fantasies. Horror can be gruesome but can reveal unexpected beauty and magic. So, I think the film successfully uses both genres to elevate each other. It has its fairy tale elements, and it’s got its blood and gore, and setting all of this off is the reality of the war. Really there are few things in real life that are as horrific and fantastical at once as war is…a very real phenomenon that people caught in the midst of must ask themselves, “Is this real? This must be a bad dream.” It’s a real nightmare, a fantasy gone wrong.

C: Well put. It’s extremely unsettling, and to grow to care for and root for Ofelia, and know that she and her mother are in constant danger in their own home, is so nerve-wracking. Yeah, the intense violence devastated me, it really stuck with me.

S: Yeah, the violence done by and to the Captain is so extreme. It’s amazing, he gets stabbed, gets his face ripped open, gets drugged, and he just keeps coming. Like a fascist Michael Myers. Now THAT’S scary, the fascist that won’t die.

The fantasy world that Ofelia discovers is so strange and threatening, and yet it becomes her safe haven, her escape, and ours too. Gosh, and I just have to say (did I just say gosh?) that Doug Jones is so, so wonderful. Having met the man (and now finding myself in complete, bashful awe of him as a performer and a person), I find his performance all the more impressive. He has a tough task – he’s the monster yet we have to accept him and want Ofelia’s destiny to be fulfilled through his orders. He’s so expressive, you just want to get closer and get in tune with him.

S: AND he plays double-duty as the Pale Man, who became an iconic monster overnight.

C: Yes! When did you make me watch that scene? Months before I watched the film, yes? God, that scene is SO frustrating. I really started losing my shit when she ate that grape! You broke the only ruuuuuule, child! Kind of biblical, huh?

S: But remember, that girl was sent to bed without her supper. And those grapes looked really good. Also, come on, when you’re that age, you do stupid stuff. You expect to sneak a snack consequence-free. You do not expect to be eaten by a monster with eye 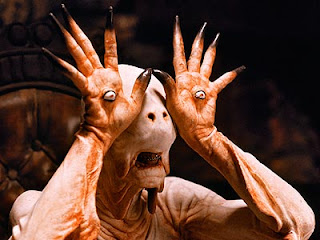 s in his hands. But I digress. You mentioned that Ofelia’s “safe haven,” the Faun’s world, is every bit as dangerous as the real world. Why do you think she prefers the fantasy world?

C: She’s sad and lonely and feels abandoned, ignored, threatened. It’s her escape and it’s AMAZING. It’s a bright spot in such a grim place. They’re holed up in the woods, there are rebels in their midst and she’s on a short leash. And there isn’t another person there her age, she has no friends. It’s like a crazy dream, come true. And I also think magic is hopeful.

Ofelia is one of a few characters taking major risks in the film, putting her life on the line for what she believes in. Mercedes and the Doctor have put themselves in grave danger. The Doctor’s last line resonated with me – “But captain, to obey – just like that – for obedience’s sake… without questioning… That’s something only people like you do.” – it’s a thought that runs through my mind often. What a struggle life can be sometimes, choosing what’s right over what’s easy, or deciding to do what you believe instead of what you’re told. It feels very relevant to me right now.

The color blue figures prominently in the film, I seem to remember. What other stylistic or aesthetic elements stuck out to you?

S: It’s a film of excesses. Everything is lush and magnified, even in the bleak settings. The Pale Man’s feast is abundant. There is an overwhelming amount of those giant cockroach-rolypoly hybrids in the frog’s tree. One image in particular that stands out to me is the mother’s troubled labor; Ofelia comes in the room and finds her stained with what looks like a gallon of blood, she’s slick with it. Guillermo del Toro is a master of that, knowing exactly how far to push an exaggeration.

The color blue does figure in prominently. It feels as though it takes place underwater. Which makes sense, as everyone – rebels, fascists, and innocent bystanders alike – is suffocating.

C: And the score is so grand, operatic. It’s a gorgeous adventure. I nearly tossed my cookies watching it, I was so tense, but it was gorgeous.

S: Thank you for saying “tossed my cookies.” You’re gorgeous.