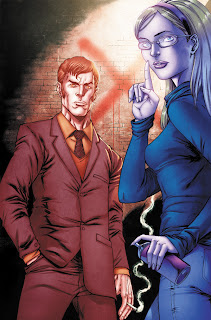 Well this book just sounds fun.  I was a big fan of Tim Seeleys’ Lovebunny and Mr Hell book…i think that was it’s name.  He does horror and humor well….
And here’s some more info:
APRIL 13, CHICAGO, IL–From C2E2, Dark Horse Comics is thrilled to announce Ex Sanguine—a unique blend of horror and thriller from Tim Seeley, the creator of Hack/Slash, writer of The Occultist, artist of The Guild, and more.
“Ex Sanguine is my take on the vampire-romance genre, but instead of being full of longing and anguished staring, it’s full of brutal flirtations between two savage predators, one a vampire, one a serial killer,” said Tim Seeley.
One is a natural-born killer—a remorseless hunter of men restlessly prowling the night for victims to quench an unnatural bloodlust. The other, Saul Adams, is a vampire. A bored vampire. His centuries of existence have left him world weary and detached, lost in a haze of endless memories for days or weeks on end. His latest bout of preoccupation is mercifully interrupted by federal agents.
They insinuate Saul’s complicity in the latest of a series of murders that have come to be known as “The Sanguine Killings.” Saul ignores these accusations, having eyes only for the bits of crime scenes they show him. The Sanguine Killer doesn’t just kill; he also paints primal pictographs in his victims’ blood. Where the feds see murderous compulsion and rage in the intricate patterns of Xs left on walls and sidewalks by the killer, Saul sees something different: Craft. Art.
“Dark Horse has long been the leader in high-quality, innovative horror comics, and I’m honored to bring my blood-soaked ‘romance’ Ex Sanguine to their impressive lineup,” Tim Seeley added.
Check out the exclusive interview on Comic Book Resources.