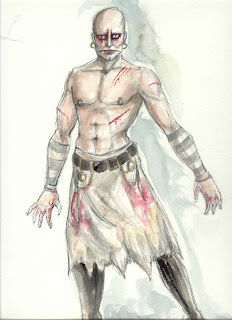 Artistic Director Log….star date January 2nd, 2012.  We have our first official rehearsal for our next play tonight: Kill Me by company member Scott T. Barsotti.  Exciting times.  I am also doing the costumes and I can tell you that the production/design meetings have been extremely exciting.  This is a different show for us….more lyrical…less tangible…more monsters…and blood of course.  I am most excited by the emphasis and movement and creating a live sound scape for the show.  Big things happening.  As for my jobs, as the costume designer  I need to get my fanny in gear to get several of the costumes done early to help the actors with the movement.  A monster needs to know what sort of monster it is before it can move like a monster evidently.  As Artistic Director…well I am still not entirely sure what I am doing…just trying to get the tanks filled and the crab to cannery basically.

The whole team will be keeping the blog filled with behind the curtain peaks of the show as we bring it to the Atheneaum Studio Theatre for its opening on February 13th, 2012.  Mark your calendars…preferably with a bloody fingerprint.