Studies in Scary – Wait Until Dark

Scott and I recently ventured to the Gene Siskel Film Center to catch a screening of Terence Young’s 1967 thriller Wait Until Dark, starring Audrey Hepburn, Alan Arkin, and Richard Crenna. The film, based on Frederick Knott’s play of the same name, tells the story of a blind woman who finds herself in the path of a group of violent criminals searching for lost drugs.

SPOILER ALERT! This conversation divulges in detail many of the scary twists and turns of the film. If you haven’t seen Wait Until Dark, you probably won’t want to read this!

Scott: So. In your opinion. Does Susy, Audrey Hepburn’s character in “Wait Until Dark,” have to be the World’s Champion Blind Lady, or are her husband’s expectations just way too high?

Casey: I don’t think they’re necessarily her husband’s expectations – she puts a lot of pressure on herself to return to a life as normal as she can make it. I also think she enjoys the challenge and enjoys showing her husband what she’s learned and how far she’s progressing, not unlike any committed relationship where one partner wants to make the other proud. The first time you saw the film, did you suspect the husband of any foul play?

S: No, he seems like a sap to me. One of those “aw shucks” kinda guys who wears his heart on his sleeve. But then, his character really doesn’t get much time to show us too much more than that. But speaking of foul play, there’s a lot of that. Alan Arkin is one bad motherfucker. Did you have any idea he could be so cold?

C: Well, his performance is so styli 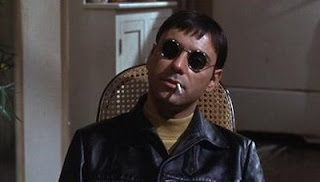 zed and his persona larger than life, but he also seems to be symbolic of that era in America. So, I didn’t know what to expect from him, really, although he is a total creep. Ha, but then you see him create these characters for Susy – Roat Jr. and Roat Sr. – and he’s so consumed by them, it’s so silly.

S: Yeah, it’s kind of ridiculous that his first strategy is playacting, and when that doesn’t work he jumps straight to murder. COLD AS ICE!!!

C: Hehehe, yeah. I was surprised by the Mike character – maybe because he’s handsome – but I didn’t expect him to go as far along in the plot as he did. He never really flinched, and at some point I bought into the character he created for Susy – he had a calming effect on the both of us.

S: He’s good. Everyone else underestimates her. And she knows they will. I love the “Mr. Roat, are you looking at me?” moment, which is a callback from a moment she shares with her husband. He says yes reflexively, he can’t imagine how she could hurt him in that moment. Or it may just be basic social sensitivity, even for the bad guy, when a blind person asks “Are you looking at me?” you answer them. I love watching her use her other heightened senses to her advantage.

C: Totes. This movie was really exciting for me. You’re watching a luminous Hepburn in this awful situation and you just want to scream through the film to her and save her. The storytelling was really impressive – I love how we learn what she can and cannot do inside her own home – the tricks she uses to get around and what trips her up. Then allll of that is put into play as the movie progresses. I love the use of the neighbor girl, Gloria, who we know is a pain in the ass sometimes, and Susy is so forgiving and kind to her, ultimately, which is very important to the story, because she really needs her on her team and comes to rely on her in an incredible way. 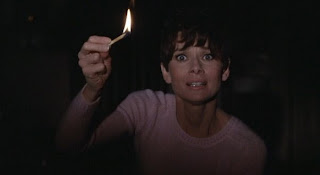 S: Yeah, I like how her abilities are revealed very patiently. I remember when I first saw it, she comes home and somebody was just smoking a cigarette in her place and I thought, “BULLSHIT! She’d smell that!” Then of course, she says “Gloria I know you’re there” but we don’t know why and then 10 minutes later, she says “Gloria’s been sneaking cigarettes again.” She’s very sly. She collects information constantly, and is thoughtful, especially later in the film, about how she reveals what she’s noticed.

C: Let’s talk about what scared you in the film – what aspects of movie magic were you most affected by?

S: It’s got great suspense and the apartment has a claustrophobic feel. It’d be scary enough if she weren’t blind, but the fact that she is heightens everything beyond your standard thriller. It’s that childhood fear of waking up in the middle of the night and knowing in your guts there’s someone in your room, or someone in the hallway, they can see you but you can’t see them. Through Susy we’re reminded of that fear of being watched by an enemy we can’t see.

C: Only because I have before and will never go back. And I didn’t see any bugs in her place.

S: Does “Wait Until Dark” feel like a horror film to you? It has one of the most famous jump scares of all time.

C: Well, I fa SHO screamed out loud in the theater when it happened! It’s really, really suspenseful, the action moves at a great pace and you just feel like Susy is falling deeper and deeper into quicksand and you’re hoping like hell she’ll make it out. But, very little blood and gore. Although, there are four murders, so, that’s pretty horrific. That’s about half the cast.

S: But is there anything that makes it a horror film, and not a suspense thriller? How is it different from ‘The Pelican Brief’?

C: My favorite! Good question, though. Maybe it isn’t. You definitely get the heeby jeebies and a knot in your stomach the entire film. It’s a character study in the evil within human beings and how far people will go for base satisfactions like money. What do you think?

S: I think that’s all true. For me it’s her blindness. That’s what makes it a horror film. She’s living through her nightmare, especially when she’s exposed to fire. We can see it, but she can only smell it, or when Roat puts it up to her face, FEEL it. That’s horrifying, but then the film also brings you into this awesome Dark Place late in the story. The “Tap! Tap! Tap!” scene. It’s completely pitch black, like she thrusts her mental and physical world onto him. And soaks him in gasoline. I think that’s the horror element though, knowing that she’s experiencing the events in total darkness because that’s her life.

C: Yeah, exactly, that’s how she lost her sight, right, in a car accident fire. Well said! Man, the “Tap! Tap! Tap!” scene is great! I loved watching her smash all the lightbulbs and you’re thinking she’s planning to sink whoever comes back for her into darkness and instead of just leveling the playing field she now has the advantage. Wow, and how she forgets about the light in the fridge, at the end of the Tap scene, and she hears the motor and is completely devastated. That moment also represented for me how much pride she takes in being able to negotiate her new blindness and she’s crushed because she feels like she’s failed. The film is really very well written, well constructed, and so suspenseful. When I get to the bottom of my queue, that’s the first one I’m re-watching. 🙂