As a new member of WildClaw, I’m under a bit of (self-imposed) pressure to beef up my knowledge of the horror genre. In particular, I’ve decided to focus on film and in an effort to expedite the process, Scott has graciously created my very own Netflix queue, chock-full of the baddest, bloodiest, and best horror fare a wife could ask for. You should know I’m a ‘fraidy-cat.

To further deepen my understanding and comprehension (and because, I guess sometimes I fall asleep while I watch movies, so I think this is sort of a test), Scott and I have decided to have a post-show chitty chat and blog about it here. So, as I work my way through the queue, we’ll post discussions, reactions and my favorite “watch through my fingers” moments. Ah, the memories of my first viewing of Silence of the Lambs come flooding back…

Up first: SUSPIRIA, Dario Argento’s 1977 horror gem. I thought, “Hey, I love dancing movies! An Italian film set in Germany? How romantic!” I had nooo idea what I was in for…

ps, if you were building YOUR classic horror film queue, what would be on it?! Mama’s got a lot to learn… 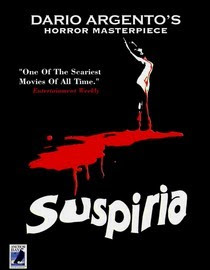 SCOTT: Every time we watch a horror movie together, there’s a moment, usually early on, when you look at me like “Why are you doing this to me?” What was that moment in Suspiria?

CASEY: Ah, yes, I know that moment well. I think that would be the scene in the bathroom, early on, where one woman is banging on the door and one is locked in there. It’s hella windy and she sees something, and is drawn to the window. It’s very suspenseful and made me cringe. Then, of course, some dead-ass hands grab her through the glass and she gets got and I was right. 🙂

S: Yeah, that’s a good one. Early on is when you get a loading dose of the film’s awesome, oppressive soundtrack, too.

C: Yes, for sure, it definitely sets the mood and the pace (of my pulse, at least). It gives you a sense of the frantic energy and manic lady mood swings to come.

S: One of my favorite things about that movie is the visual style. Bright colors, odd angles, shots framed like paintings. It’s very pretty and alluring, but then crazy disorienting.

C: It’s almost like a fantasy world, like they live in a piece of candy. Which would be great if it weren’t a psychotic piece of homicidal candy. Very rich colors, deep greens and reds, lots of close ups. It does feel like you’ve stepped into the biggest nightmare of a children’s book ever created.

S: What did you think of the main girl, Suzy?

C: I thought she was a lot more brave than I would be in her situation, and also way stupid. Curiosity almost kills the cat. But it’s not just Suzy; I often wonder in horror movies, when characters are in very dark or dangerous situations where they can feel in their guts that something is wrong, why they don’t immediately remove themselves from those situations? I guess, because, there would be no story if they did, but I’m the type of gal who moves subway cars the instant I feel dangerous vibes or some weirdo is just too weird. 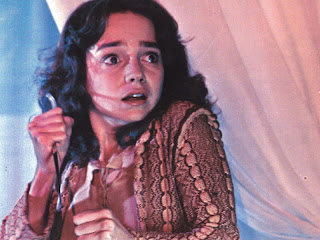 S: So, do you think she’s being a hero when she’s going into the heart of darkness to find Helena Markos? Is it about revenge? If you were playing that role how would you justify it?

C: Maybe she thinks she has nothing to lose? She’s been drugged and essentially held captive for the better part of the film, so maybe she knows she has to get herself out, do it for herself, if she’s gonna get out alive. I wouldn’t say hero, I thought she was quite naive, actually, but she does take the initiative and determine she’s not going to let those crazy bitches decide her fate. There is a lot of bravery in avenging the death of her friend, certainly. And she makes it out alive, so bully for her!

S: The scene from the movie that really sticks with me is the scene in the city square, when Daniel the pianist is killed by his dog, creepy to think that the witches have enough power to make a loyal animal literally eat its owner. What sticks with you?

C: Oh my God, I know! I totally forgot about that! There is some dark shit going down in the Game of Thrones book I’m reading right now, involving animals turning on their owners (and I don’t know how or why yet, so don’t anybody ruin it for me!). That’s a great scene, very haunting.

Oh man, that undead biotch in the basement, her voice is the WORST. It’s like Kathleen Turner got stuck in a vault of cigar smoke for 150 years. It’s really, really terrible and very scary. And the fact that you can’t see her, she’s old as shit but she’s still very sharp and very dangerous. Oh man, she’s a nasty witch, dude. Overall, I thought the film was effectively spooktastic. You don’t get the same bells and whistles that you see in more modern films, but the film gets into your head and delivers the thrills.