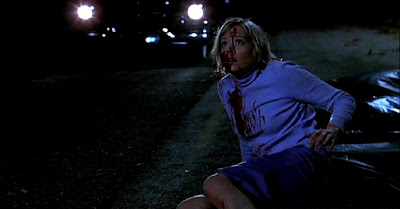 2003’s Twilight Zone-y Dead End (directed by Jean-Baptiste Andrea and Fabrice Canepa) is an unassuming little thriller in the mode of Carnival of Souls. I don’t think I’m giving anything away by stating this up front, because it’s so damned obvious to the viewer what’s going on, even if it’s not obvious to the characters in the film. This is the afterlife as an unpleasant car trip with your family. Hell, in other words.

The story here follows The Harringtons, Frank and Laura, and their children, Marion and Richard, on a long drive to Grandma’s house for Christmas. Along for the ride is Marion’s fiance, Brad. It’s late on Christmas Eve, and Frank nods off ever so briefly behind the wheel, narrowly avoiding a collision with an oncoming car. After the near miss, they meet a hitchhiker on the road: a girl in a white dress carrying a baby. They give her a ride. During a pit stop, she lets Brad hold the baby. To his horror and dismay, the baby is dead. And soon, so is Brad, victim of a mysterious hearse that appears every time someone dies. As the trip continues down an endless highway that seems to loop back on itself, the Harringtons succumb to the hearse one by one.

I think you can fill in the rest. It’s not terribly original and, like I say, it’s not a hard movie to decode. But it’s not bad for all of that. In fact, it was agreeably well-made. It makes the most of its limited setting. The car acts as a kind of microcosm where each of the characters is put into the crucible. The intent here is to deconstruct the family we’re presented, and the Harringtons are suitably dysfunctional. Watching them tear themselves to pieces is the main pleasure of the movie, though the filmmakers offer a literal version of this, too. It likes its gore. This kind of movie rises and falls on its performances, and here, the filmmakers have wisely spent their money on pretty good actors. Ray Wise is the most recognizable face in the cast as Frank, and his put-upon patriarch reminds me a LOT of Leland Palmer from Twin Peaks. It’s a similar performance. He doesn’t overreach this–indeed, he’s probably cashing a paycheck here–but Leland Palmer was a pretty good character, and so is Frank Harrington. The movie is all but stolen from everyone by Lin Shaye as Laura, though, who the filmmakers have provided with freak-out scenes and a license to chew the scenery. She dutifully obliges them. The other actors are good, too, though only Alexandra Holden is given any meat to chew on. 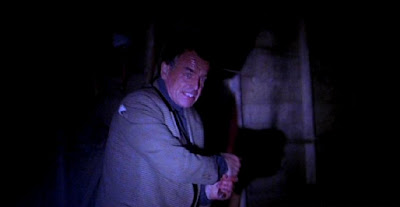 For the most part, it’s fun watching these people come apart at the seams, but the movie is a what would have been a B-movie programmer once upon a time, and it embraces that niche. That it’s so derivative is disappointing, because this same selection of talent is clearly capable of better. One wishes that they had just a leetle more ambition. But they don’t, and the result is perfectly fine. It’s well paced and well-shot, and it does an admirable job with it’s few gross-out scenes. Just don’t expect it to surprise you.