Our fourth Deathscribe hails from Tarzana, California, a neighborhood in Los Angeles named after Tarzan. Think I’m kidding? You’re wrong. The neighborhood is located on land that was formerly a ranch owned by this guy. But we’re not here to talk about Tarzan. We’re here to talk about Thomas Misuraca, whose radio play ENTITY is all the scarier for its spare simplicity. Directed by The Factory Theater’s Manny Tamayo, this twisted interview between a reporter and an inmate at a mental institution will get under your skin. Plus it’s set in Cincinnati…and if that’s not scary I don’t know what is.

Thomas Misuraca: There is nothing scarier than our own imaginations. When you hear about something horrifying, you created your own image of it in your head. That is what radio allows you to do. In visual media, if you show a ghost or a monster or a frightening scene, it may not work for everybody because they don’t find that image quite scary. Plus, with radio, the audience needs to listen, and some words can be creepier than any visions.

WC: “Entity” creeped us out. What is it about “Entity” that creeps you out?

TM: I creeped myself out with Sam telling Dillion what may (or may not be) happening to his daughter. Sam talks with such conviction, it becomes hard to doubt him. And then to think that this horrible scene is taking place while Dillion listens and is helpless to act… brrrrrrrrr… [Literary Daemon’s note: uh-huh.]

TM: The sound of Dillion banging his head against the metal door. That could be pretty creepy to hear.

TM: It’s difficult to create tension/fear in such a short amount of time. But on the other hand, you can’t go on too long and lose your audience. In a regular ten minute play you have the difficulty of catching an audience’s attention, having a believable story arc in a short time, and then giving an exclamation point at the end. Adding have to scare them on top of that, and it is a little more difficult. But a rewarding challenge. 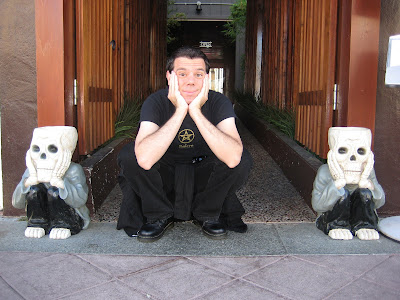 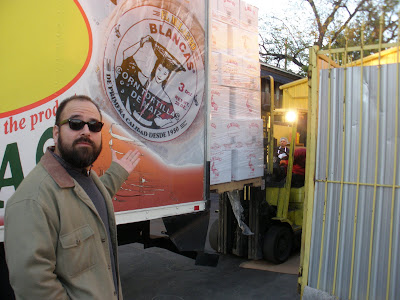 Manny Tamayo is thankful for the opportunity to work on DEATHSCRIBE. He is a 9 year Veteran of the Psychic Wars with the Factory Theater. Manny hails from Joliet.