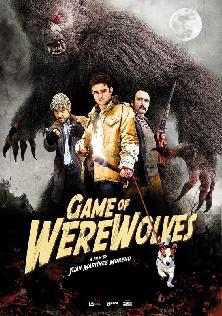 GAME OF WEREWOLVES (aka LOBOS DE ARGA) will be screening at the Chicago Latino Film Festival this Monday 4/23 and Wednesday 4/25.

I just saw this flick at the Brussels International Fantasy Film Festival, and it’s really quite awesome. In chatting with the director following the screening, I learned that he was going to be attending the Chicago Latino Film Festival next week, so you’ll not only get to see one of the more awesome werewolf flicks in recent memory, but you’ll also get to meet cool cat Juan Moreno Martinez, writer/director of LOBOS DE ARGA (the original Spanish title, and the one we both prefer).

Tomas, a successful writer, is invited back to his hometown of Arga where he is to receive an award for his accomplishments. Little does the writer know it’s a trap the townspeople have devised hoping his arrival will end a 100 year old village curse. A mock-comedy of the werewolf craze, this film takes you on a laugh-out-loud thriller to enjoy.

And here’s my brief review:

“I’m sure this catchphrase will be used time and again once writer/director Moreno’s love letter to the Universal classics, Paul Naschy and 80s practical effects makes its way into the public consciousness, so I’m going to seize the opportunity that comes with having seen it first: “GAME OF WEREWOLVES does for lycanthropes what SHAUN OF THE DEAD did for zombies.”  There, now I feel better. But in all seriousness, there is much here to favorably compare with Edgar Wright’s instant undead classic: It is first and foremost a situational, character-based comedy – not a spoof – dealing with ordinary characters trapped in extraordinary, supernatural circumstances. In this case, writer Gorka Otxoa returns to his home village coincidentally on the 100th anniversary of the gypsy curse laid upon it. Things get hairy in a hurry, with nary a CGI wolf nor cuddly TWILIGHT boy toy in sight, and the heads roll as fast and furious as the belly laughs. Highly recommended, and one I’ll be rooting for over the next few months to make its way in the world.”

How to get there:

Hope to see some of you blood brothers and sisters there!

PS Here’s a link to the trailer as well. http://www.youtube.com/watch?v=BeR8LPt4LM4