Free Movie Passes for Attack of the Block 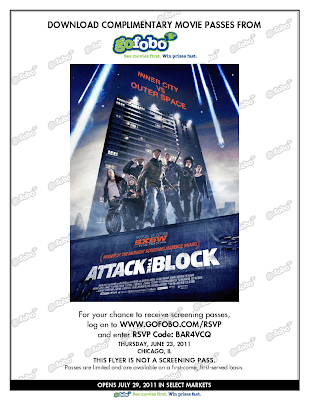 From the producers of Shaun of the Dead and Hot Fuzz, ATTACK THE BLOCK follows a gang of tough inner-city kids who try to defend their turf against an invasion of savage alien creatures, turning a South London apartment complex into an extraterrestrial warzone .

·        This film was written and directed by Joe Cornish; Nira Park and James Wilson produced, and Edgar Wright (Shaun of the Dead, Hot Fuzz) is an executive producer on the film.
·        ATTACK THE BLOCK won the midnight screening audience award at this year’s SXSW film festival.
·        ATTACK THE BLOCK opens limited in theaters on July 29, 2011 in the following cities: Los Angeles, New York, Chicago, San Francisco, Austin, Seattle, and Toronto.