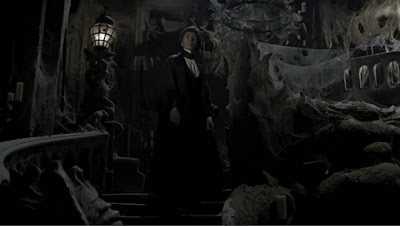 Movie adaptations of Dracula almost never shed the influence of John Balderston and Hamilton Deane’s stage play, almost always to their detriment. Almost alone of Dracula adaptations, the one that I wish had hewed closer to the play than to the book is John Badham’s 1979 version. Frank Langella was just coming off a successful, and now legendary production of the play. You may have heard of it. It’s the one with the sets and costumes designed by the late Edward Gorey in black, white, and red. The producers of the 1979 movie brought Langella to the screen, but left Gorey on the stage. I can imagine a movie version that includes both as a kind of ur-Tim Burton movie. Or maybe not. The existing photographs suggest a weird kind of silent film. Sadly, it was not to be. 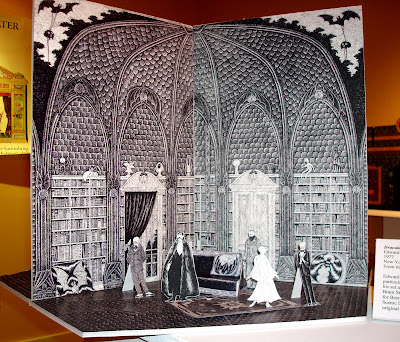 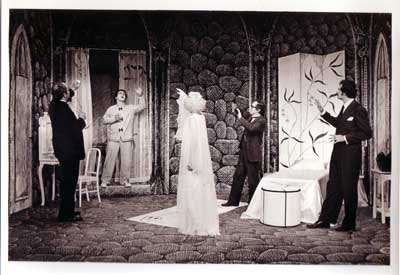 Badham’s Dracula takes more liberties with the material than usual. Among the pointless changes made to the story is recasting Mina as Van Helsing’s daughter, recasting Lucy as Dr. Seward’s daughter and as the heroine of the movie. It omits the prologue in Transylvania, too. This is the result of screenwriter W. D. Richter over-thinking the plot of the story, methinks. Richter is known for screenplays that are complex to the point of goofiness, and this movie is no different. Some of the changes are interesting, though. The decision to begin with the wreck of the Demeter is a post modern flourish that hearkens back to Nosferatu, and the movie stages the wreckage with a delightful level of menace. The scenes of Dracula crawling down walls are from the book. Still other elements are plucked from the vast filmography of Dracula movies. This isn’t an adaptation of the story so much as it’s a commentary on the screen image of Dracula. 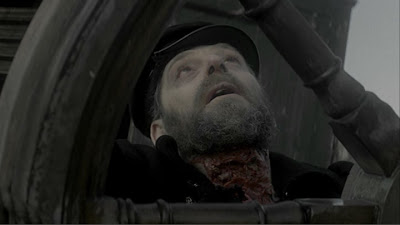 From the opening frames, this is a beautiful, ornate production. No cheap Hammer knock-off, this. It has good actors, too, though I think Langella is a tad too smooth an operator as the Count and Olivier is too in love with doing an accent as Van Helsing. It’s odd seeing Olivier feasting on Peter Cushing’s leavings, but here it is none the less. Kate Nelligan, on the other hand, pretty much steals every scene she’s in. I had a crush on her when I first saw the movie way back when. 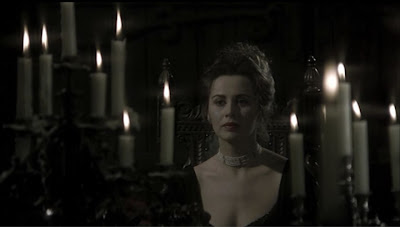 The movie has disappointingly few horrifying set-pieces. It tries too hard for most of its running time. The wreck of the Demeter I already mentioned, and it’s good. The others, involving the count, have a tendency to skirt towards ridiculousness, though without ever quite crossing the line. It’s not generally a scary movie, and that may be partially the fault of an over-familiarity with the Dracula story. But I don’t think so. It does manage at least one humdinger of a horror set piece, though: Mina (in the Lucy role) becomes the Bloofer lady during the early going. Our erstwhile vampire hunters break through her grave to the abandoned coal mines that riddle the landscape, where they catch up to her just after sunset. This version of Mina is an apparition that craves a kiss from her father. The scene is ghastly beyond all expectations, but even here, the movie is frustratingly inconsistent, given that the scene is predicated on Mina casting a reflection in a pool of water. In the very next scene, the movie goes out of its way to demonstrate that vampires don’t cast reflections. Lazy. The rest? The movie ends with a disappointing anticlimax, I think, one in which it seems that the filmmakers aren’t quite sure how to end things. 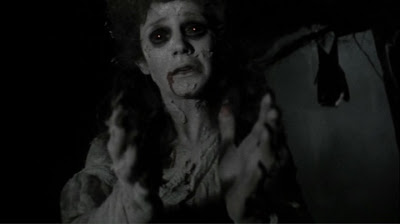 This is a film for which I have a good deal of affection–it’s an interesting film even though it’s a singularly frustrating one–but I can’t defend its flaws. I originally saw it when I was young, and it made an impression. It was one of those movies that I waited until the wee hours of the morning to watch when it was first on cable, often just before sunrise, and that experience casts the film as a kind of dream memory for me. Watching it again now kind of punctures that memory, which is too bad, but I expect I’ll get over it.