Netflix Roulette: Bachelor Party in the Bungalow of the Damned 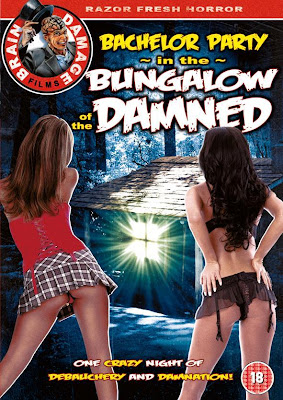 The algorithm that randomly picks the movies for these posts? She is a cruel, cruel mistress. Today, she serves up a steaming turd-pile named Bachelor Party in the Bungalow of the Damned (2008, directed by Brian Thompson). Let’s not mince words. This film sucks. Painfully. Boringly. It sucks so hard, light cannot escape its pull.

Everything you need to know is right there in the title of the film. Five friends head to a bungalow in the Hamptons to fete one of their own on the eve of his marriage. The house is provided by the uncle of their creepy friend, Gordon, who gets twitchy once the strippers/escorts arrive. With good reason, it seems, because the trio of escorts are demons intent on devouring them all. Best man Sammy is left with the task of defending his friends after forgoing the festivities (what a mensch!). Complicating things is Michelle, the fiance of the eponymous bachelor, who shows up late in the movie. Blah, blah, blah.

If it wasn’t explicit from the title, this microbudget quickie is intended to be a bad movie, a la early Troma or certain films by Fred Olen Ray or Jim Wynorski. It even name-checks Lloyd Kaufman, who shows up in a particularly tasteless cameo near the beginning, just so there’s no misunderstanding. The trouble with intentionally making a bad movie is that, more often than not, you succeed beyond your wildest expectations. This is borderline unwatchable. It’s not even fun. In the interests of full disclosure, I should admit that I don’t have the patience for this kind of stuff anymore, which might make me a bad horror fan these days. This film totally isn’t made for the likes of me. It’s made for an audience of arrested adolescent male douchebags, an audience it dutifully reflects on-screen with its main characters. So there it is.

For a movie about T&A, this is just about the un-sexiest movie I can imagine. I won’t comment on our trio of strippers beyond stating that it takes more than a cheap latex mini dress from Hot Topic to make a woman sexy. The men, on the other hand, get no free pass. These guys are repellent, and not because they’re physically unattractive. That’s a matter of taste, though my own preferences in masculine hotness run to guys who aren’t going around shirtless with fishbelly-white beer guts, as most of our “heroes” are doing in the early goings. No, they’re unattractive because they’re sleazy. One of our “heroes,” Paulie, is first seen harassing a girl on a bench as she’s reading. Another, Fish, is first glimpsed after a tryst with a transvestite (have I mentioned that this movie has a streak of homophobia that’s a mile wide? Well, it does). Our “good guy” best man is the ringleader of the weekend. All three of these guys behave with contempt toward the introverted Gordon (who oozes creepiness, but nevermind that). Only Chuck, the bachelor, is nice to Gordon, but that bank of good will evaporates as soon as he climbs into the saddle with one of the escorts. Have these filmmakers learned nothing from the archetypal bachelor party movie? In which Tom Hanks makes a point of being faithful to Tawny Kitaen against all odds? Apparently not.

I dunno, maybe I’m being unduly harsh toward a defenselessly dreadful movie, but, screw it. It’s easy to make excuses for movies from this sector. They’re cheap. They can’t afford extravagant effects and purpose-built sets. But if Sam Raimi could leverage a micro budget into The Evil Dead, if the makers of The Blair Witch Project could leverage an even smaller micro-budget into actual multiplexes, it’s hard for me to cut movies like this one any slack. Of course, those movies had something this one lacks: talent, taste, a commitment to making an actual, by god movie. By contrast, this movie seems more like a bunch of guys screwing around with a camcorder on their weekends.