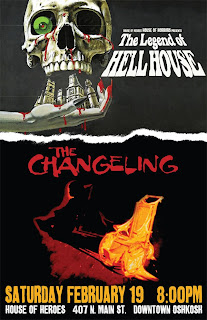 The Doc and Jon Kitley (of Kitley’s Krypt) will be roadtripping this weekend to the wilds of Oshkosh, WI, to take in the spine-tingling pleasures of John Pata and the Oshkosh Horror gang’s monthly HOUSE OF HORRORS double feature. February’s outing is one of a ghostly variety, featuring two of the best creepers out there. If you’re near the Fox Valley, or up for a bit of driving, join us Saturday night!

“House of Horrors is all about getting people together to celebrate our love for the horror genre. Over the past three and a half years, we’ve seen much of what the horror genre has to offer….together…in the dark. Part of the fun at House of Horrors is not only viewing the movies we all love, but showing a title or two that perhaps you haven’t seen. This month we are focusing on two titles, we feel, might be under the radar and/or overlooked. Plus… this is our first haunted house double feature!

On top of the movies, we will be hosting another round of horror movie trivia, so start studying for your chance to win all sorts of goodies! As always, House of Horrors is free and open to the public, so bring your friends!”

Dr. AC weighs in on this most awesome of double features:

Changeling, The (1980)
This stellar haunted house tale usually takes a back seat to the big budget envisioning of Stephen King’s The Shining, released the same year. But in many ways, Peter Medak’s smaller film, loaded with creepy atmosphere and tightly fashioned suspense sequences, surpasses any axe-swinging histrionics that Kubrick dishes out. As a grieving composer recovering from the deaths of his wife and daughter (a harrowing pre-credits sequence), George C. Scott anchors the picture with a compelling strength and vulnerability. Roused by a murdered child’s spirit in the mansion where he has retreated, Scott’s utter conviction with which he seeks to uncover the mystery is riveting. There’s also the neat subplot of Melyvn Douglas’ duplicitous politician, whose backstory proves more and more integral to the house’s healing. William Gray and Diana Maddox have crafted a marvelous script, one that functions not only as a pure ghost story but equally well as a character study charting Scott’s journey back from the abyss of tragedy and loss. Well worth seeking out.

In the pantheon of top-notch haunted house movies, this fine, moody offering ranks just below Robert Wise’s outstanding The Haunting, to which it owes a great debt. The familiar premise concerns a team of spiritual sleuths assigned to investigate Belasco House (aka “Hell House”) to provide evidence of life after death. However, unlike the ambiguity of Shirley Jackson’s story or the subsequent film version, Richard Matheson’s screenplay (adapted from his novel) elects to make the existence of the malevolent presence within the so-called “Mount Everest of haunted houses” undeniably explicit. Rather than resorting to cheap bloodletting, director John Hough achieves a true visceral quality through skillful use of camera angles and sound, achieving terrific suspense and shocks through well-executed low-tech effects (slamming doors, flying silverware, etc.) The film is well served by its accomplished cast, headlined by medium Pamela Franklin (who cut her acting teeth in another masterful ghost story, The Innocents) and parapsychologist Roddy McDowell, the rattled sole survivor from Hell House’s last expedition. Matheson adds a kinky sexual element to the proceedings, complete with lusty somnambulists and unnerving spectral assaults. Fine electronic score by Delia Derbyshire and Brian Hodgson.