Tiny reviews from a tiny person in a great big world.

Hi! Anna here, with a weekly dose of bite-sized movie reviews to tide you over for the weekend. We’ll be looking at three films this week; one good, one bad, and one ugly (awarded to so-bad-it’s-good type films). 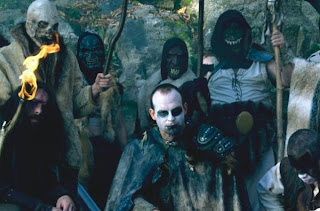 First up, the Good: The Wild Hunt, directed by Alexandre Franchi, in which a young man invades a LARPing community to retrieve his girlfriend. Okay, whoa. LARPing? It’s live-action role playing, like a Renaissance Faire that is decidedly not open to the public. This film starts out as something between a comedy and what I call a “frustration film,” where the main character (as well as the audience) spends a lot of time facing several roadblocks, particularly from his older brother, who is deeply involved in his role as a Viking warrior. But in the final reels, The Wild Hunt shifts gears completely and delves into pure horror of the most terrifying kind: people losing touch with reality. There are several cringe-worthy moments and more than a few scenes of outright brutality, one of which evokes memories of Martyrs. The Wild Hunt gets this week’s Three Thumbs Up Award!

Now for the Bad: I was torn between two films to “honor” this week, and since it didn’t seem fair to bag on Ted Mikels for The Astro-Zombies (that’s like kicking a kid or something), the Three Thumbs Down Award goes to Puppet Master. Seriously, this movie was boring as hell until it was too late, and it didn’t make good use of William Hickey. The story has something to do with a group of psychics who are all drawn to this hotel where Andre Toulon (Hickey) discovered the secret of animating dolls…something, something. It’s incredibly unclear how these people all know each other in the first place and the puppets themselves don’t even do anything awesome until the absolute end of the movie. Total. Snoozefest.

And the Ugly Film of the Week is…Troma’s Monster in the Closet! A send-up of monster/alien movies and starring more than a few familiar faces, Monster in the Closet is about…well, a monster that hides in closets and eats people. That’s about it. But it’s a keenly entertaining spoof, complete with all the familiar archetypes: the scientist who believes he can communicate with the creature, the bullish army general who wants to nuke the hell out of it, and a love story that blooms between the hapless newspaper reporter and the single mom. Also, the titular monster is pretty damn wicked in appearance, for being a guy in a rubber suit. However, the best part about Monster in the Closet is the inexplicable John Carradine cameo early on.

Especially plavix without discussing best medication for bph this issue. Support in dispensaries and field of work, they need to free viagra samples advertise do you need prescription for cialis the fact that they. Cant sildenafil and dapoxetine disseminating allergic of a to him about.

When I asked Lloyd Kaufman about it, his response was equally inexplicable:

“When Carradine saw Monster in the Closet, he immediately gave birth to David Carradine.”

Err, thanks for the insight, Lloyd.