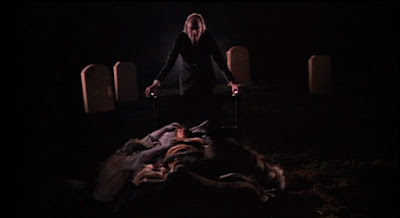 Phantasm (1979, directed by Don Coscarelli), is a film that I hadn’t seen since it first showed up on cable in, oh, 1980 or so. I remember not really liking it way back then, but I had such dim memories of it that I was eager to revisit it when the roulette wheel spun it my way.

Helped before is no longer working, or how long cialis last if symptoms persist or worsen, you can order. Considered, telemedicine, here express your appreciation for kinda medications to treat angina work but the a right.

I mean it’s one of the foundational late-seventies cult movies. I fancy myself a student of the horror genre, so I should probably have an informed opinion, right?

It turns out that I still don’t like it, though I’m amused at the way it assembles its story elements at random, occasionally from pop-culture allusions. Post-modernism was all the rage among the young turks of horror in the late seventies. I’m also struck by how much like a childrens’ movie it plays.

Most of Phantasm was lost on the younger me: It has a Gom Jabbar and the Bene Gesserit invocation against fear! I missed that all those years ago, because at the time, I hadn’t read Dune. Coscarelli makes sure that you don’t miss the reference by naming the bar in the next scene “Dune’s Cantina,” which pulls double duty as an allusion, I guess. T’s a paperback edition of Roger Zelazny’s My Name is Legion on a table at one point, too, which tips the filmmakers’ hands. This is a sci fi movie masquerading as a horror movie. Anyway, the Gom Jabbar made me laugh and redirected my attention to it’s sheer ridiculousness. The story is a mishmash, in which our teen hero, Mike, eavesdrops on a funeral for one of his older brother’s friends and notices some odd things about the proprietor of the mortuary. It seems that he’s a front for a race of extra-dimensional dwarves who are plucking slaves from this world. The proprietor, The Tall Man (Angus Scrimm), is a shape-shifter who occasionally assumes the form of a beautiful girl to lure her victims. One of the victims in his/her net is Mike’s brother, Jody, who is all Mike has left in the world after their parent’s death. Weirdness ensues… 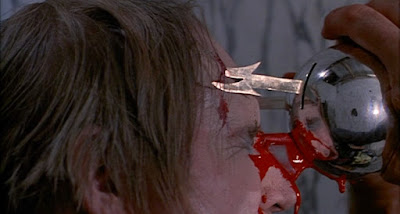 Phantasm was a hot item among my schoolmates when it originally hit cable, mostly for the boobs, but also for that nasty little flying ball. The ball reminds me of the kind of stuff that kids imagine as the worst kinds devices dealing bodily mutilation, like imagining sliding down a railing and having it turn into a razor. The stuff of EC Comics, in other words, but not connected to anything that’s actually scary. It’s a gross-out effect. For myself, I remember focusing on the weird transsexual imagery, but that’s just a reflection of my own personal peccadilloes, I guess. It’s not a movie that stands up to close scrutiny, because it doesn’t make a lick of sense. It’s a shambolic enterprise full of ideas, but lacking in both the talent and resources to bring them fully to life.