Another week, another MYSTERY PHOTO!

Jon Kitley, pillar of the Chicago Horror Community and head honcho over at KITLEY’S KRYPT, wants to challenge your horror knowledge. Week in, week out, he posts a Mystery Photo – sometimes from an obscure horror title, sometimes just an unusual shot from a well-known classic. We figured our faithful Claw readers would enjoy the challenge!

Our last photo was from Jess Franco’s erotic vampire film, FEMALE VAMPIRE, which also goes by the name of Erotikill, Les Avaleuses and The Bare Breasted Countess. It stars Franco’s muse and life partner Lina Romay as a descendant of Count Dracula who – depending on which version you see – needs the blood or the semen of both male and female victims, in order to stay alive. One of the reasons for the film’s many retitlings is the fact that there were numerous cuts distributed, including one version containing hardcore sex scenes. Regardless of which version you see, they all contain bizarrely meandering (and often out of focus) camerawork and Romay wandering the forests wearing little more than a cape and her full-lipped pout. Viewers will either find this little number hypnotic or utterly boring, depending on their patience level. But hang in there until you get to “the bedpost scene.” Must be seen to be believed.

Let’s see how you fare with this week’s selection: 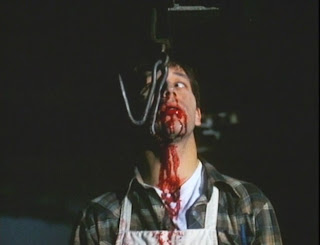 Send your guesses, with the subject line “MYSTERY PHOTO”, to jon@kitleyskrypt.com

If you provide the correct answer, your name will be announced next week on the Kitley’s Krypt website (http://www.kitleyskrypt.com), along with a new photo. Even if you don’t know the answer, we welcome any sorta-kinda educated guess! So, send in your emails today and good luck!