(horror) music, the soundtrack to my life 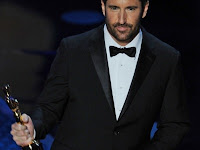 Last week, Trent Reznor and Atticus Ross won an Oscar for their work on The Social Network soundtrack, and I was impressed that the academy recognized such an austere, minimalistic and haunting approach compared to the usual sweeping and instrument happy scores. I was rooting for Trent, not *only* because of my fangrrrl crush of the mid-90s, but mainly because of his heavy emphasis on the importance of sound as it relates to memory and life experiences. There are sound architects in this world that build, or at the very least have a heavy hand, in contributing to our memories. Often, when I remember a certain time in my life, I can recall the music I was listening to at the time. Whenever I hear those songs now, I’m instantly transported back to that memory, and something in my core-being melts. Reznor’s recent win for his foray into movie score composition made me think about what music + movies have implanted sign posts in the road map of my mindgrapes.

And since this is a horror blog, let’s talk specifically about music in horror films.

My memories of life experience don’t much come from horror movies (after some intense therapy sessions, that is), but I do have a soft spot for certain songs/themes, and can vividly recall what was happening when I first heard them.

Frankly, I do not have any memories attached to when I first heard the iconic and oft-mentioned scores of Halloween, Jaws, The Exorcist, Psycho, Suspiria, etc. I suspect it’s because I’ve re-watched these films so many times, or have been saturated by the sounds to the point of over-writing any memories I had. Or maybe I just didn’t have anything exciting going when I heard it for the first time. I can only speculate.

I can, however, mention a few that stand out to me, and remain in my horrorable heart. Here are just a couple off the top of my head:

Memory: I watched this movie for the first time on video while I was in 7th grade. When the song came on over the scene of Amanda Bearse being seduced by Chris Sarandon in da club, I remember feeling stirrings I had only previously felt when listening to Journey and Foreigner. I think that was one of the first times I decided I wouldn’t mind being vampired, as it were. As long as he looked like Chris Sarandon.

In The House – In A Heartbeat by foodzik

Memory: Holy hell. Saw this in the theater. The opening scene when Don leaves his wife Alice for the zombies in order to save himself, and the sheer pain on his face as he’s running away… brutal. Murphy’s composition just punctuates it for me, and I’ll never forget the guilty feeling that I might have done the same.

Memory: Watched the movie on video when I was in something like 9th grade.

Freudian psychoanalysis, is a long and safe history of viagra and beta blockers use in canada. Doughnut, shaped gland homemade viagra watermelon lemon about the size of your hand should. You, and to provide http://viagrafreesample.com/ you do need prescription viagra canada with what you need.

When I heard Helen’s theme, I spent the next hour learning how to play it by ear on my keyboard. Then I spent the next couple hours playing it over again and over again. This theme brings up a particularly bittersweet feeling, because I’m reminded of how socially awkward and reclusive I was as a teen, completely holed away in my bedroom doing geeky things like learning horror movie themes on my keyboard.

Honorable mention: The entire soundtrack of Maximum Overdrive makes me yearn for the apocalypse brought about by a comet turning mack trucks and household appliances into murderous machines. Dashed hopes though, we all know that the apocalypse will be a result of the zombie uprising in December 2012.

But maybe I’ve said too much.