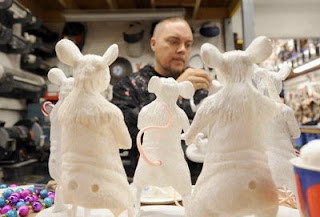 MARIETTA, Ga. – Andre Freitas is talking about how to make a convincing dead body.

“It depends whether the remains have been eaten or whether they are people who just died, whether they’ve been under ground for six months, whether or not the remains are burned,” he explains, drop-dead serious, no pun intended.

Freitas knows his bodies, from their bloody eyeballs to their melting skin. He creates them, plus zombies, vampires and goblins, but he’s not above mice and dinosaurs. If you’re in the grip of AMC’s new hit show “Walking Dead,” about humans facing the apocalypse, you’re in Freitas’ grip. He’s one of many wizards contracted to work for KNB EFX Group, the company that creates the special effects for the scarily real zombies on “Walking Dead.”

Freitas, 39, runs his own company, AFX Studios, in Marietta, so you’ve seen more of his work. Next month he returns for reshoots on “Abraham Lincoln: Vampire Hunter,” the big-budget 20th Century Fox movie due out next year. In December he goes back to work on “Teen Wolf,” MTV’s foray into werewolf drama starting production on its second season. And he worked on the makeup of Beast, the character in “X-Men: First Class,” just released to DVD.

He’s not just a guy with a talent for prosthetic makeup, though that’s how he fattened up actors in this year’s “Big Momma’s House 3: Like Father Like Son” movie (fattening his wallet with $40,000 to $50,000 for the five-month gig, he says). He’s also a sculptor, propmaker, costume designer and exhibit builder. This guy is Smithsonian-trained.

The evidence is everywhere in his studio. It is Halloween 365 days a year in the 4,000-square-foot space, with disembodied heads hanging from the rafters, collections of skulls and glass eyeballs in display cases, and shelves overflowing with hands and arms. The skeleton he made for the 1994 movie “Nell,” with the daisies Jodie Foster placed in its eye sockets, hangs on the wall. An arm from the 1993 real-horror flick “Kalifornia,” starring Brad Pitt and David Duchovny, collects dust on a shelf.

The overriding theme of the work may be dark but not all of it is meant to frighten. The largest table in the studio during a recent visit features a clay sculpture of the Three Blind Mice, characters commissioned by the Entertainment Design Group for a family holiday show. It’s for Gaylord Entertainment’s “Christmasy DreamWorks Experience,” coming to Oxon Hill, Md., on Nov. 18.

A dozen print images of the mice, the models, are set up as a backdrop to the wire-frame armature. More than 35 sculpting tools lay on the table around it. Freitas turns his effort to a mouse he’s sculpting. The specs call for the commission to withstand freezing temperatures that characterize the winter show.

That means he can’t attach fur separately and must texturize the exterior of the mouse to look like hair movement. He pulls out a small strip of thick plastic and explains how to bring out the clay a little more. From there he shows photos of the 17-foot fish he designed for the McCormick & Schmick’s restaurant chain. He built four of the fish, which took eight weeks apiece and cost $40,000 each. A cast of the head of the giant 24-foot dinosaur he did for Fernbank Museum of Natural History in Atlanta sits in the back.

Freitas discovered a love for creating ghouls and goblins in 1979, when his mother bought him a Mighty Men & Monster Maker kit. She died shortly afterward of ovarian cancer. His father was a specialist engineer for Lockheed, and the family lived in Iran and Singapore. But after his wife died, Freitas’ father decided to take a job in Georgia to provide more stability for his two boys.

As a freshman in high school, Freitas adopted a friend’s interest in special effects and began devouring books and magazines on the subject. Soon, he was building props and applying makeup to other kids. A photo album shows his first efforts at creating an old man out of a teenager.

Freitas said his father was largely supportive. Even so, plaster, paint and makeup can be expensive. At 15, he got a job at Ace Hardware to get discounted materials.

Freitas’ senior class went to Washington for a week to learn about how the government works. His father contacted the Smithsonian Institution’s Office of Exhibits to ask if his son might have a tour – his way of encouraging his son to check into government work. He wanted to convince the young man that it might not be as boring as he thought. The Office of Exhibits graciously agreed, and Freitas went, carrying his portfolio, which by now included three years of his teenage work.

A few weeks after he returned from the trip, a letter arrived in the mail: The Office of Exhibits asked whether he would like to be an apprentice. He started the day after he graduated. The internship lasted four months. He was the only person at the American University dormitory who wasn’t in college. His roommate was in law school.

Freitas said he started college but that it just didn’t make sense for him. They wanted him to work too slowly, and what’s more, they wanted him to pay for it. When he landed his first commission at age 20 – for $80,000 – even his father stopped talking about the value of an education.

After his time at the Smithsonian, he went to Los Angeles for a few months, then opened his studio in Marietta. The Smithsonian offered him a job shortly after he had signed the lease, so he declined.

Next month, AFX Studios will hit the 20-year mark. Staying in Georgia has made him a better artist, Freitas insists as he clicks through photos of his work on a giant computer screen. Next to him stand two life-size characters from the Cartoon Network movie “Level Up,” which will air this month.

The movie is about four high school kids battling “trolls, ghouls and a dark leader” after they’re inadvertently released from a video game into the real world. One of the characters is made in the likeness of a Minotaur. Scraps of leather from the costume lay in a bucket on the floor.

What seems most amazing to Freitas is that he gets the opportunity to work with people like Greg Nicotero, executive producer of “Walking Dead” and the N in KNB EFX Group.

“I get to work with people I read about as a kid,” he said. “Who could ask for more than that?” And with that comes the closest thing to a smile yet.